Can there be a greater blessing or anything more fun than grandchildren? We have three and each of them is my favorite. They visited this past weekend. It was too cold to stay outside so the indoor activity was wide open−especially our guy, Jensen. He may have two big sisters but he is all boy! I have a feeling he is pretty friendly with everyone but I still try to tell myself that he and his “Peeps” (that’s me) are special buds.

We “camp out” every night (sleep together so he won’t fuss about staying in the pack and play), he helps me get the Buck Stove going in the morning, and my iPhone is pretty much his when he wants it. It features a Bible story app that offers animated and narrated stories from the Old and New Testaments. 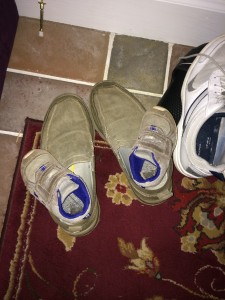 He’s only two years old, so when he asks to play with my phone, he does so by saying, “I want Jesus.” Although he has been introduced to many Bible characters, it is interesting that he sees Jesus as the one who is representative of them all. I cannot explain the workings of his young mind that come to that conclusion, but he is correct in his expression.

The entire Word of God leads ultimately to the Son of God. He is eminent and rises to the forefront of scripture. After all, he is “the Word who was with God,” and the “Word who was God” (John 1:1).

When we were rounding up their belongings to head home, we found he had placed his small shoes on top of mine. Why he did that I cannot prove, but I was reminded to join his parents and others in “walking” in such a way that will be safe for him to follow (John 13:15). I hope that in some small way my example will one day help him to say, “I want Jesus,” when he will desire much more than my smart phone.