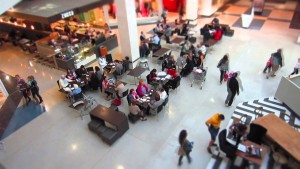 Last week I was at the Concord Mills Mall not far from our home, looking to replace a favorite pair of shoes.  Due to expired leases, all of the food court was temporarily closed except for three shops.  It figures that the only one that I considered worthwhile was the choice of the majority of shoppers who had crowded the Mall on that rainy Saturday.  From the time I got in line until I sat to eat, over 45 minutes had passed, most of which was spent waiting until my order was filled.  As I watched people come and go, I noticed a young man and his attractive companion take their places in the order line.  To say that this fellow was a physical specimen is an understatement.  Folks, this guy had muscles on his muscles.  He was trim, cut, ripped, buff, you name it.  I remember thinking, I need to shed 25 pounds, but this guy could still probably lift me with one hand!  I also recall thinking that the pretty girlfriend (or wife) with him did not have to worry about threatening situations as long as her strong man was nearby.

In His great prayer for believers in John 17, Jesus says that He had been “keeping” the disciples and had “guarded” them.  The word “guarded” comes from the Greek “phulasso,” and refers to safeguarding, or the protection from outside dangers.  It is also used in Luke 11:21, in describing the “fully armed strong man” who “guards his house, and his possessions are undisturbed.”  Whether we admit it or not, we all need a strong man to guard us in this life, from dangers without and within.  We are weak, and in our weakness, Jesus’ strength can be made perfect (2 Corinthians 12:9).

Time will pass, and the physical appearance of that young man in the Mall will look more like the rest of us.  But the strength of our Protector will not fade, and will carry us to our eternal destination (Isaiah 26:4).  We need not fear, for He is with us (Hebrews 13:5).  Trying to deal with life in our own strength only drains our strength.  We need to lean on our “strong man.”

Jesus loves me, this I know, for the Bible tells me so, Little ones to Him belong, we are weak, but He is strong.